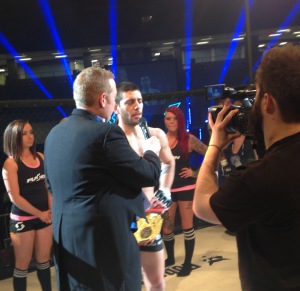 BILLINGS, MT, FRIDAY, FEBRUARY 20, 2015 – Hamilton Ash, Head Coach at SBG North in Whitefish, MT, won Fusion Fight League 155 lb title and belt at Fusion Fight League’s Rumble Under the Rim at Metra Park in Billings. The Mixed Martial Arts event showcased 26 fighters from all over the Northwest region. Ash’s opponent, Ben Lugo, traveled from Fort Collins, Colorado where he trains at Z’s Training Gym. The title bout was scheduled for five rounds, but Ash only needed one. He controlled the fight from the opening bell, stalking his opponent and looking for opportunities. After landing a successful head kick, Ash clinched with Lugo against the cage and ultimately secured a take down. From there he quickly transitioned to mount, showcasing his skills in grappling and jiu jitsu. The referee stopped the fight at 2:30 in the first round, giving Ash the win by Technical Knock Out (TKO).

Ash is the fifth fighter from Straight Blast Gym of Montana to earn a Title Belt. “Hamilton turned 25 less than a month ago and is our head coach at SBG North in Whitefish. He lives and breathes this sport. With his desire, focus, and work ethic at his age, this will be the first of many titles,” said Travis Davison, coach and head trainer for Straight Blast Gym of Montana in Kalispell.

View all posts by kisadavison