KALISPELL, MT, SEPTEMBER 24, 2016 – Straight Blast Gym Kalispell and SBG North sent 5 fighters to the Kalispell Kombat event at Majestic Valley Arena this past weekend.  The event was hosted by FightForce, a promoter that organizes MMA bouts across Montana.

First up was SBG’s Derrick Moody against Erik McQueen. They spent most of the first round in the clinch where Moody landed lots of knees to the legs and one to the midsection that led to a take down. Once the fight went to the ground Moody made quick work of McQueen and came away with a first round TKO.

Next up was 18 year old new comer Gage Morsette from SBG against Isaiah Burkhalter. Morsette landed a big right hand to start the fight and sent Burkhalter into wrestler mode where the former FHS wrestler was out wrestled. Morsette took Burkhalter’s back and forced him to tap out midway through the first round due to a rear naked choke.

In the co-main event Duran Flaget faced Devante Kyse. They had several exchanges on the feet and Flaget, a former FHS wrestler, landed a couple of takedowns before securing Kyse’ back and locking in the rear naked choke. Flaget’s win was the third 1st round finish for SBG.

The main event pitted SBG’s Hamilton Ash against Michael Kuehne. Ash out wrestled the former FHS wrestler, scoring several take downs over 2 and half rounds of action. In the first round Ash landed a foot sweep, mounted Kuehne and nearly secured a guillotine choke at the end of the first. Ash continued to dominate the clinch in the second and landed several knees up against the fence. The finish came half way through the third and final round. Ash took Kuehne down against the fence and mounted him, Kuehne gave up his back to avoid strikes and Ash put him in a body triangle. Kuehne was forced to tap due to a rear naked choke giving SBG a clean sweep on the night going 4-0.

Travis Davison, owner and head coach at Straight Blast Gym in Kalispell commented,“I am so proud of these guys! My coaches are the best around and our fans couldn’t be more supportive. Sorry Josh’s opponent no showed but I have no doubt we would have been 5-0 had he had the courage to show up. Derrick, Duran, Gage, Josh and Hamilton you guys put in the work and reaped the rewards. Thank you for your loyalty and hard work. It is an honor to be in your corner.” 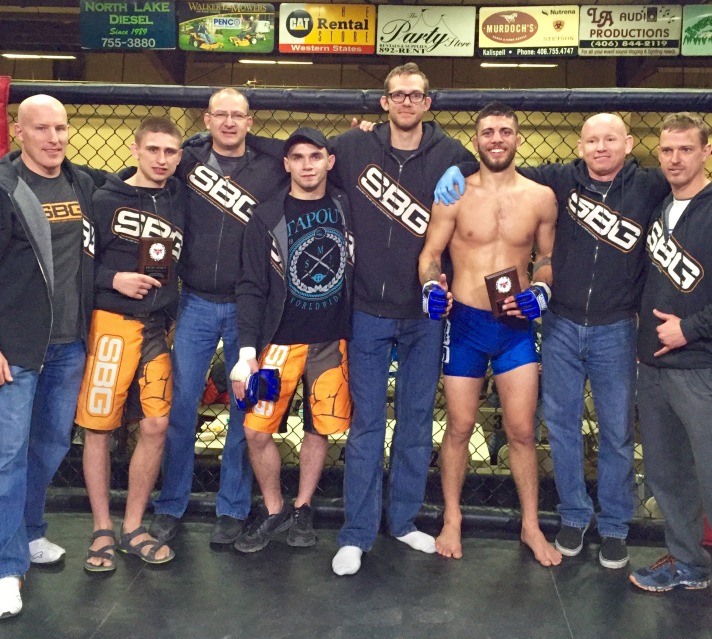 View all posts by kisadavison